The previous lectures by Jos de Bruijn covered various W3C standards of Semantic Web languages, which we shall continue with this week. More precisely, we will look at the Web Ontology Languages—not just one standard like previous years, but two: the successor of OWL, OWL 2, has become a W3C recommendation about 2 weeks ago and the tools you will use in the lab already can cope with OWL 2 (to a greater or lesser extent).

To put the languages in their right location, you can have a look at the common layer cake picture on the right (for the beginner in ‘modelling knowledge’, there is also an OWL primer): 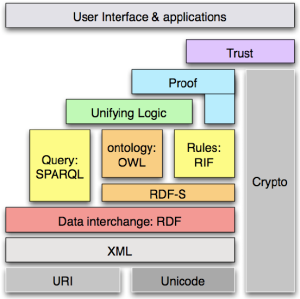 RDFS has some problems to function as ontology language—expressive limitations, syntactic and semantic issues—which is what OWL aimed to address so as to provide a comprehensive ontology language for the Semantic Web. In addition to the RDFS issues, several predecessors to OWL had a considerable influence on the final product, most notably SHOE, DAML-ONT, OIL, and DAML+OIL, and, more generally, the fruits of 20 years of research and prototyping of automated reasoners by the Description Logics (DL) community. What makes OWL a Semantic Web language compared to the DL languages, is that OWL uses URI references as names (like used in RDF, e.g., http://www.w3.org/2002/07/owl#Thing), OWL gathers information into ontologies stored as documents written in RDF/XML including things like owl:imports, and it adds RDF data types and XML schema data types for the ranges of data properties (attributes).

In addition, there was a document of requirements and objectives that such an ontology langue for the Semantic Web should meet, which we shall address during the lecture. The “making of an ontology language” article [1] gives a general historical view and summary of OWL with its three species (OWL lite, OWL-DL, and OWL full) and the details of the standard can be found here, which will be summarized in the lecture. It does not, however, give you a clear definition of what an ontology is (other than a DL knowledge base)—this is a topic we shall address later in the course—but instead gives some directions on they purposes it can be used for.

Over the past 5 years, OWL has been used across subject domains, but in particular in the heath care and life sciences disciplines, perhaps also thanks to the W3C interest group dedicated to this topic (the HCLS IG). Experimentation with the standard, however, revealed expected as well as unexpected shortcomings in addition to the ideas mentioned in the “Future extensions” section of [1] so that a successor to OWL was deemed to be of value. Work towards a standardization of an OWL 2 took shape after the OWL Experiences and Directions workshop in 2007 and a final draft was ready by late 2008. On October 27 2009 it has become the official OWL 2 W3C recommendation.

What does this OWL 2 consists of, and what does it fix? This will be the topic of the second lecture on 17 November. The language aims to address (to a greater or lesser extent) the issues described in section 2 of [2], which is not quite a super- or subset of [1]’s ideas for possible extensions. For instance, the consideration to perhaps cater for the Unique Name Assumption did not make it into OWL 2, despite that it has quite an effect on the complexity of a language [3].

First, you can see the ‘orchestration’ of the various aspects of OWL 2 in the figure below. The top section indicates several syntaxes that can be used to serialize the ontology, with RDF/XML being required and the other four optional. Then there are mappings between an OWL ontology and RDF graph in the middle, and the lower half depicts that there is both a direct semantics (“OWL 2 DL”) and an RDF-based one (“OWL 2 full”).

The structure of OWL 2

Second, the OWL 2 DL species is based on SROIQ(D) [4], which is more expressive than the base language of OWL-DL (SHOIN(D)) and therewith meeting some of the ontology modellers’ requests, such as a few more properties of properties (the second role chaining example in [2] is wrong, though, which will be discussed in lecture 6) and qualified number restrictions. Then there is cleaner support for annotations, debatable (from an ontological perspective, that is) punning for metamodelling, and a deceptive ‘key’ functionality that is not a key in the common and traditional sense of keys in conceptual models and databases. Also, it irons out some difficulties that tool implementers had with the syntaxes of OWL and makes importing ontologies more transparent. To name but a few things.

Third, in addition to the OWL 2 DL version, there are three OWL 2 profiles, which are, strictly speaking, sub-languages of (syntactic restrictions on) OWL 2 DL so as to cater for different purposes of ontology usage in applications. This choice has its consequences that very well can, but may not necessarily, turn out to be a positive one; we shall dwell on this point in lecture 5 about ontology engineering methodologies. The three profiles are OWL 2 EL that is based on the EL++ language [5], OWL 2 QL that is based on the DL-LiteR language [6], and OWL 2 RL that is inspired by Description Logic Programs and pD [7], which are intended for use with large relatively simple type-level ontologies, querying large amounts of instances through the ontology, and ontologies with rules and data in the form of RDF triples, respectively. Like with OWL 2 DL, each of these languages has automated reasoners tailored to the language so as to achieve the best performance for the application scenario. Indirectly, the notion of the profiles and automated reasoners says you cannot have it all together in one language and expect to have good performance with your ontology and ontology-driven information system. Such is life with the limitations of computers (why this is so, is taught in the theory of computing course), but one can achieve quite impressive results with the languages and its tools that are practically not really doable with paper-based manual efforts or OWL 2 DL.

During this second lecture, we discuss the OWL 2 features and profiles more comprehensively and provide context to the rationale how and why things ended up the way they did.

[1] Ian Horrocks, Peter F. Patel-Schneider, and Frank van Harmelen. From SHIQ and RDF to OWL: The making of a web ontology language. Journal of Web Semantics, 1(1):7, 2003.

[4] I. Horrocks, O. Kutz, and U. Sattler. The Even More Irresistible SROIQ. In Proc. of the 10th International Conference of Knowledge Representation and Reasoning (KR-2006), Lake District UK, 2006.