In addition to the many keynote speeches, scientific presentations, and panels, Informática 2009 in Cuba also had a 2-hour high-level panel on the conference’s theme, called “National ICT policies for development and sovereignty“, which took place yesterday morning. In the presence of some 1000 attendees and the secretary general of the International Telecommunications Union (ITU), Dr. Hamadoun Touré, the ministers in informatica/ICT/telecommunications of Cuba, Iran, South Africa, Saudi-Arabia, Venezuela, and Vietnam and national telecomms heads of Bulgaria, Nicaragua, and Russia each held a speech. UPDATE (28-2-2009): see also the transcript of the speech of Ramiro Valdéz Menéndez, who is the Commander of the Revolution and Minister of Informatics and Communictions in Cuba.

While each VIP presented country-specific particularities and emphases, there were five recurring topics across the presentations.

The country-specific themes included, among others, South Africa’s move from analog to digital with the set-top boxes and Cuba’s focus on knowledge management and open source projects.

I will add links, quotes, and photos later, as the next scientific session is about to start (more about that when I’m back from Cuba in about 2 weeks).

overview of the VIP panel during Informática 2009

photo of the article on the front page of the Granma, about the opening of Informatica 2009

During the lunch breaks, students from UCI (Universidad de las Ciencias Informáticas) took care of the cultural programme, with dance and music. 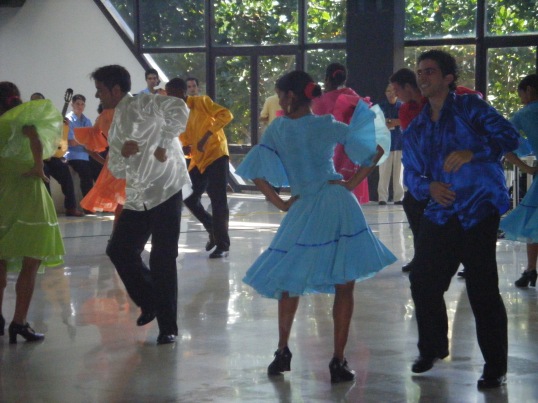 The comprehensive introductory overview of PCS in the Stanford Encyclopedia of Philosophy by Turner and Eden [1] starts with “some central issues” that are phrased into 27 principal questions that are in need of an answer. To name just a few: What kind of things are computer programs? What kind of things are digital objects, and do we need a new ontological category for them? What does it mean for a program to be correct? What is information? Why are there so many programming languages and programming paradigms? The remainder of the SEP entry on PCS is devoted to giving the setting of the discourses in some detail.

The contents in the entry focuses primarily on the dual nature of programs, programming languages, semantics, logic, proofs, and closes with legal and ethical issues in PCS; a selection that might be open to criticism by people who feel their pet topic ought to have been covered as well (but I leave it to them to stand up). The final words, however, are devoted to the nagging thought if PCS merely gives a twist to other fields of philosophy or if there are indeed new issues to resolve.

In any case, it is already noteworthy to read that Turner and Eden do not consider the act of programming itself as being part of computer science; and rightly so. That could be useful to take into account by people who write job openings offering new postdoc/assistant professor positions, many of which require “strong programming skills”. By the philosophers’ take on CS, they should have asked for good programmers but not researchers, because CS researchers are specialised in the meta-activities such as “design, development and investigation of the concepts and methodologies that facilitate and aid the specification, development, implementation and analysis of computational systems” [1] (emphasis added), i.e., not the actual development and implementation of software systems. On the other hand, the weird thing with the PCS entry is their CS-is-what-computer-scientists-do: if computer scientists decide to slack collectively, then PCS itself would degrade to investigate the non-output of CS, i.e., be obsolete, or, if research funding agencies were to pay mainly or only for ‘integrated projects’ that apply theory to develop working information systems for industry (or biologists, healthcare professionals, etc.), then that is what CS degenerates into? If that were the case, then CS would not merit to be called a science.

In this narrative, now would be a good place for a treatise on definitions of computer science to demonstrate the discipline is sane and structured, to simplify communication with non-informaticians, and feed philosophers with the settled basics to dwell upon. But then I would have to go into finer distinctions, made in e.g. the Netherlands, between informatika and informatiekunde (roughly, computer science vs. information engineering)—the former being more theoretical along the lines of the topics in the PCS entry and the latter includes more socio- psycho- cognitive- managerial topics—and extant definitions by the various organisations, dictionaries and so forth (e.g., here, here, here). I will do a bit more homework on this first, before writing anything about that (and before that, I will go to Geomatica’09 in Cuba and glue a few days holiday to the conference visit; so, within a few days, it will be quiet here until the end of February).