Yet another successful International Conference on Knowledge Engineering and Knowledge Management 2014 (EKAW’14) (in Linköping, Sweden) has just concluded. It was packed with three keynotes, long ans short presentations, posters and demo session, and related workshops and PhD symposium. Big thanks to Patrick Lambrix for the excellent local organisation, and to Stefan Schlobach and Krzysztof Janowicz for putting an interesting programme together! The remainder of the post touches upon some highlights.

The first keynote was by Pascal Hitzler, who talked about ontology design patterns (ODPs) for large-scale data interchange and discovery. He emphasised the need for principled use of ODPs, including the development of a theory of patterns concerning generic vs specific modelling patterns, developing pattern languages and tools, and understanding and formalising relationships between patterns. It sort of did set the tone, and ODPs were a recurring item of the conference. Oscar Corcho gave a reflective and very entertaining keynote on ontology engineering (slides on slideshare). Not to mention the language and tool wars (DL and Protégé won), are you an alpha (philosopher—one term a day), beta, gamma, delta, or epsilon (schema.org contributor), or a ‘savage’ in the brave little world of knowledge management? He identified five deadlocks on communicating the message to ‘the masses’ (ontology reuse, inferences, lightweight vs heavyweight, tooling, multilingualism) and four recommendations; the one missing being on what to do with multilingualism. A lively discussion followed, and references to some of the aspects raised were returning throughout the conference and probably will afterwards as well. The third keynote was by philosopher Arianna Betti, who was basically putting forward the question what we can give her for helping her in the digital humanities on tracking scientific ideas, as described in humanities texts, over time—toward a computational history of ideas. The view from outside in a way was describing some requirements for us and generated some brainstorming afterward, as it does not seem unfeasible to do. A brief handout with some more precise ideas on where models would fit is available via here twitter account (direct link).

Unlike in my PhD student years where I typically tried to read at least a third of the papers before going to the conference, I’ve gotten in the habit of selecting papers to read based on the titles and presentations, and I haven’t read yet the ones I’m mentioning now, but they seem worth mentioning anyway (obviously with my bias and interests, daily intake-capacity, and time constraints writing this the evening before departure in the very early morning).

Several people at UCT are looking into crowdsourcing, and there were two papers about that, being one using pay-as-you-go alignments [1] and one Protégé plugin linked to CrowdFlower for ontology development that despite the CrowdFlower costs, ended up to being cheaper than a few manual experts [2]. Somewhat related to that is Klink UM for extracting hierarchical and similarity relationships based on user feedback [3], and when we’re at it with relationships, there’s a paper on finding (improving) the semantics of relations, being DBpedia’s wikiPage wiki links [4], as well as how object properties are used in ontologies [5]. The latter discovered that object properties are used quite differently when using ODPs vs not using ODPs: the former more often reuses a property and constrains it in an axiom, the latter uses more subtyping and domain and range axioms, and the latter appears to be computationally more efficient (so there are some interesting trade-offs to look into). Other considerations in modelling included further works on anti-patterns with results from real knowledge base development [6]. Related to my own talk about the stuff ontology, was the paper on supply chains and traceability of datasets [7], which we possibly can combine in some way. The paper on clinical guidelines [8] will be passed on to one of my students, who’s trying to build one tailored to a low resource setting with less-skilled health workers, and we probably also will follow up on the study question generation paper [9] that used a knowledge base and template questions to generate natural language questions that the system also can answer, therewith automating to some extent interactive learning by the student. The latter also won the best demo award. The best paper award went to the paper on adaptive knowledge propagation in web ontologies [10].

A conference would not be complete without some social event(s). There was even an extra social event the first evening: ice hockey, which was fun, not only because it was the first time I watched such a game in a stadium, but also because there’s a lot of action and it never gets dull, and to top it off, the Linköping team won. Really impressive was the ‘movie’ at Norrköping’s Visualiseringscenter, being the “cosmos 3D” interactive show narrated live by the centre’s director Prof. Anders Ynnerman. We were treated on a trip through space—navigating from the ISS to the outer boundary of the universe—that was all based on current data and scientific evidence. This was followed by a walk-and-play-around in the rest of the centre, and a tasty dinner where Patrick made a fun story out of the talking frog joke. As per usual, it was also a great opportunity to meet colleagues again, discuss, and plan follow-up research, as well as meeting new people and finally meeting others in person whom I only knew by papers. The next EKAW will be in 2016 Bologna, Italy (statistically less cold and dark than here, though the lights have their charm).

(note: in time, people will have their papers on their home pages; for now, most links are to the Springer version)

While I’ll be at EKAW’14 to network, present the stuff ontology, and support SUGOI, some of my students will hold the fort locally at the African Language Technologies Workshop (AFLaT’14) on 27-28 November in Cape Town. One of the two posters & demos I contributed to is about a cute tool that two 3rd-year students—Ntokozo Zwane and Sungunani Silubonde—designed and implemented as their capstone project for software engineering, which they called VocabLift (zip). The capstone groups’ task was to develop a tool that can help someone to learn vocabulary in a playful way, which had some leeway to be creative in how to realize that.

The context is that everyone has to learn vocabulary over the years, from basic words in primary school to scientific terminology at university, and any time when one is learning a new language. Besides memorizing ‘boring’ lists of words from a sheet of paper, there are more playful ways to do this, like the multi-player dictionary game and hangman, or single-player memory cards game from the EuroTalk DVDs. There are indeed many word games online, e.g., for English, and learning a foreign language on duolingo, but there is less for multilingualism and the languages in Southern Africa. EuroTalk DVDs for Zulu, Shona, Swahili, Yoruba and a few other African languages do exist, true, but at a cost and they are inflexible in a teaching setting. Enter VocabLift, which is both technologically interesting and for the target languages chosen: isiZulu and Shona, and English and French. Conceptually, it is based on natural language-independent root questions that are mapped to the language of choice, so another language easily can be added, and, unlike the usual ‘closed’ world of the computer-based language games, a teacher can add words to the dictionary, making it in principle adaptable to the desired level of language learning.

Currently, VocabLift has three games: the Picture Matcher, Vocab Trainer, and Word Tetris. In Picture Matcher, the name of the object in the picture has to be provided by the user, with as objective to improve memory and spelling in the chosen language; a screenshots for avocado in isiZulu and pineapple Shona are shown below.

Pineapple in Shona, after I clicked ‘I don’t know’

Vocab Trainer tests the user’s ability to recall the word given in English in the target language; screenshots for green in isiZulu and gray in French are shown below.

Same story, and just to show it works for French, too.

The third game, Word Tetris is included so that the user can learn to match the word to the picture. The user has to type the word associated with the picture before it falls below the bar; a screenshot is shown below (I lost points due to trying make nice screenshots, really). 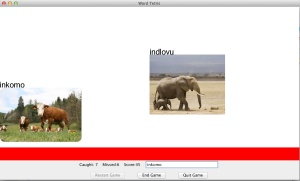 One needs to be logged in as administrator to add words (admin 1234 will do the trick) and use the tool in ‘dictionary mode’, as illustrated in the next two screenshots. 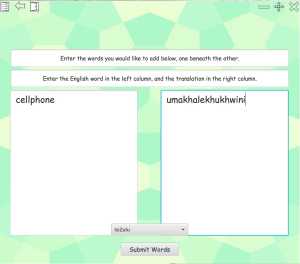 Adding terms, having selected to add it to the isiZulu dictionary

Cellphone was added (and you also can find the answer to ‘green’, above)

VocabLift has been implemented using JavaFX and XML, making the tool platform-independent (click the VocabLift.jar file once the downloaded zip file is unzipped). I’ll readily admit it is very well possible to add more features, adapt it to have it running also on a mobile, or refine the HCI, and some educational technologies researcher may want to investigate whether this or something like it improves the learning outcome significantly, but it was a fun software engineering project over a timespan of a mere two months (with other parts of the course being taught) and words surely can be learnt (at least I have, and so did the students).

The AFLaT’14 poster and demo session runs from 15:30-16:30 on the 27th and will remain available during the breaks on the 28th as well, and Ntokozo and Sungunani will be happy to demo it for you and describe more details about it.

Her thesis was about realising that library of foundational ontologies that had been proposed since late 2003 (in that WonderWeb deliverable D18). The concrete library is the online Repository for Ontologies of MULtiple Uses, ROMULUS, which was described briefly in the MEDI’13 paper [1], and she has a CSIR “technology demonstrator” about it (file) that received an overall panel evaluation of 90%. The theoretical foundations principally had to do with aligning and mapping the foundational ontologies that are included in the library, which are, to date, the OWL versions of DOLCE, GFO, and BFO, which has appeared in a KCAP’13 poster [2] and KEOD’13 full paper [3] and an extended version is due to appear in a best-papers-of-KEOD book [4]. In case you want to have more details: check Zubeida’s thesis, and I have a few blog posts that informally introduce the material: the first announcement of ROMULUS and the KCAP poster.

ROMULUS also contains an online and extended version of the foundational ontology recommender ONSET [5] (which was mostly her Bsc(hons) project, and whose integration into ROMULUS was part of her MSc), various documentation and browse and search features, and the new SUGOI tool for automated foundational ontology interchangeability [6].

Zubeida recently started her PhD at UCT with me as advisor, on ontology modularity, but in case you have feedback on the work, suggestions, or perhaps also new mappings to/from your favourite foundational ontology, feel free to contact her (or me)!

p.s.: Engineering news has an item about the awards, and so will CSIR have one.

p.p.s.: The minimum requirements for the award was:
-Published more than one paper in a peer reviewed publication
-Excellent behavioural attributes as attested by fellow team members such as work ethic and developing a good personal and professional relationships and an active contribution as a team member
-Above average performance score
-The studies must have been completed on a record time
-Excellent academic achievement