We’re in the midst of preparing for the ICPC Southern Africa Regionals, to be held in October, and so I step up reading problems to find nice ones to train the interested students in a range of topics. The “Ensuring truth” problem was one of those, which I’ll discuss in the remainder of the post, since there’s no discussion of it online yet (only some code), and it is not as daunting as it may look like at first glance: 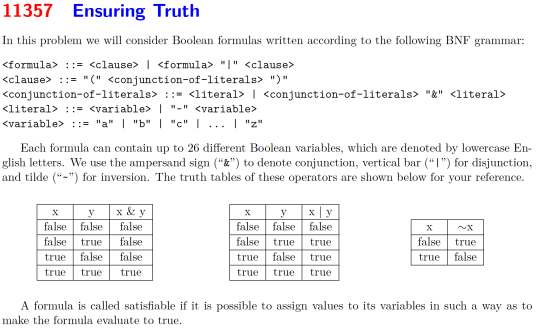 The task is to determine whether such a formula is satisfiable.

While it may ‘scare’ a 1st or 2nd-year student, when you actually break it down and play with an example or two, it turns out to be pretty easy. The ‘scary’ looking aspects are the basic propositional logic truth tables and the BNF grammar for (simplified!) Boolean formulas. Satisfiability of normal Boolean formulas is NP-compete, which you may have memorised, so that looks daunting as well, as if the contestant would have to come up with a nifty optimization to stay within the time limit. As it appears, not so.

Instead of being put off by it, let’s look at what is going on. The first line of the BNF grammar says that a formula can be a clause, or a formula followed by a clause that is separated by a disjunction (| ‘or’). The second line says that a clause is a conjunction of literals, which (in the third line) transpires to be just a series of ‘and’ (&) conjunctions between literals. The fourth lines states that a literal can be a variable or its negation, and the fifth line states that a variable is one of the letters in the alphabet.

Now try to generate a few inputs that adhere to this grammar. Swapping one variable at a time on the left of the “::=” sign for one of the elements on the right-hand side of the “::=” sign in the BNF grammar, with steps indicated with “=>”, then e.g.:

It’s a series of disjunctions of conjuncts, and only one of the conjuncts shouldn’t have a contradiction for the formula to be satisfiable. The only way we get a contradiction is if both a literal and its negation are in the same conjunct (analyse the truth tables if you didn’t know that). So, the only thing you have to do with the input is to check whether within the brackets there is, say, an x and a ~x, and with the first conjunct you encounter where there is no contradiction, then the formula is satisfiable and you print YES, else NO. That’s all. So, when given “(a)|(~a&b&a&c)”, you know upon processing the first conjunct “(a)”, that the answer is YES, because “(a)” is trivially not contradictory and thus we can ignore the “(~a&b&a&c)” that does have a contradiction (it doesn’t matter anymore, because we have found one already that doesn’t).

I’ll leave the implementation as an exercise to the reader  :).