Students enrolled in my ontology engineering course have to do a “mini-project” on a particular topic, chosen from a list of topics, such as on ontology quality, verbalisations, or language features, and may be theoretical or software development-oriented. In terms of papers, the most impressive result was OntoPartS that resulted in an ESWC2012 paper with the two postgraduate students [1], but also quite some other useful results have come out of it over the past 7 years that I’m teaching it in one form or another. This year’s top project in terms of understanding the theory, creativity to do something with it that hasn’t been done before, and working software using Semantic Web technologies was the “OWL Classifier” by Aashiq Parker, Brian Mc George, and Muhummad Patel.

The OWL classifier classifies an OWL ontology in any of its ‘species’, which can be any of the 8 specified in the standard, i.e., the 3 OWL 1 ones and the 5 OWL 2 ones. It also gives information on the DL ‘alphabet soup’—which axioms use which language feature with which letter, and an explanation of the letters—and reports on which axioms are the ones that violate a particular species. An example is shown in the following screenshot, with an exercise ontology on phone points:

The students’ motivation to develop it was because they had to learn about DLs and the OWL species, but Protégé 4.x and 5.x don’t tell you the species and the interfaces have only a basic, generic, explanation for the DL expressivity. I concur. And is has gotten worse with Protégé 5.0: if an ontology is outside OWL 2 DL, it still says the ‘old’ DL expressivity plus an easy-to-overlook tiny red triangle in the top-right corner once the reasoner was invoked (using Hermit 1.3.8) or a cryptic “internal reasoner error” message (Pellet), whereas with Protégé 4.x you at least got a pop-up box complaining about the ‘non-simple role…’ issues. Compare that with the neat feedback like this:

It is also very ‘sensitive’—more so than one would be with Protégé alone. Any remote ontology imports have to be available at the location specified with the IRI. Violations due to wrong datatype usage is a known issue with the OWL Reasoner Evaluation set of ontologies, and which we’ve bumped into with the TDD testing as well. The tool doesn’t accept the invalid ones (wrong datatypes—one can select any XML data type in Protégé, but the OWL standard doesn’t support them all). In addition, a language such as OWL 2 QL has further restrictions on types of datatypes. (It is also not trivial to figure out manually whether some ontology is suitable for OBDA or not.) So I tried one from the Ontop website’s examples, presumably in OWL 2 QL: 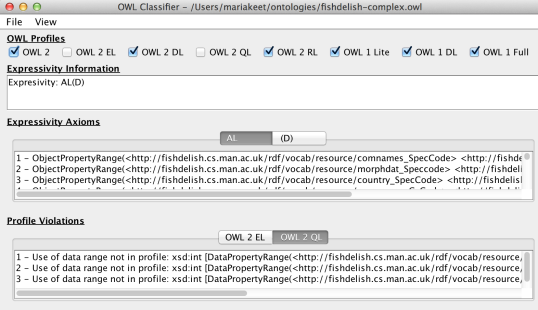 Strictly speaking, it isn’t in OWL 2 QL! The OWL 2 QL profile does have xsd:integer as datatype [2], not xsd:int, as, and I quote the standard, “the intersection of the value spaces of any set of these datatypes [including xsd:integer but not xsd:int, mk] is either empty or infinite, which is necessary to obtain the desired computational properties”. [UPDATE 24-6, thanks to Martin Rezk:] The main toolset for OWL 2 QL, Ontop, actually does support xsd:int and a few other datatypes beyond the standard (e.g.: also float and boolean). There is similar syntax fun to be had with the pizza ontology: the original one is indeed in OWL DL, but if you open the file in Protégé 5 and save it, it is not in OWL DL anymore but in OWL 2 DL, for the save operation snuck in an owl#NamedIndividual. Click on the thumbnails below to see the before-and-after in the OWL classifier. This is not an increase in expressiveness—both are in SHOIN—just syntax and tooling.

The OWL Classifier can thus classify both OWL 1 and OWL 2 ontologies, which it does through a careful orchestration of two OWL APIs: v1.4.3 was the last one to support OWL 1 species checking, whereas for the OWL 2 ontologies, the latest version is used (v4.2.3). The jar file and the source code are freely available on github for anyone to use and to take further. Turning it into a Protégé plugin very likely will make at least next year’s ontology engineering students happy. Comments, questions, and suggestion are welcome!