Last month I wrote about Test-Driven Development for ontologies, which is described in more detail in the ESWC’16 paper I co-authored with Agnieszka Lawrynowicz [1]. That paper does not describe much about the actual tool implementing the tests, TDDonto, although we have it and used it for the performance evaluation. Some more detail on its design and more experimental results are described in the paper “The TDDonto Tool for Test-Driven Development of DL Knowledge Bases” [2] that has just been published in the proceedings of the 29th International Workshop on Description Logics, which will take place next weekend in Cape Town (22-25 April 2016).

What we couldn’t include there in [2] is multiple screenshots to show how it works, but a blog is a fine medium for that, so I’ll illustrate the tool with some examples in the remainder of the post. It’s an alpha version that works. No usability and HCI evaluations have been done, but at least it’s a Protégé plugin rather than command line :).

First, you need to download the plugin from Agnieszka’s ARISTOTELES project page and place the jar file in the plugins folder of Protégé 5.0. You can then go to the Protégé menu bar, select Windows – Views – Evaluation views – TDDOnto, and place it somewhere on the screen and start using it. For the examples here, I used the African Wildlife Ontology tutorial ontology (AWO v1) from my ontology engineering course.

Make sure to have selected an automated reasoner, and classify your ontology. Now, type a new test in the “New test” field at the top, e.g. carnivore DisjointWith: herbivore, click “Add test”, select the checkbox of the test to execute, and click the “Execute test”: the status will be returned, as shown in the screenshot below. In this case, the “OK” says that the disjointness is already asserted or entailed in the ontology. 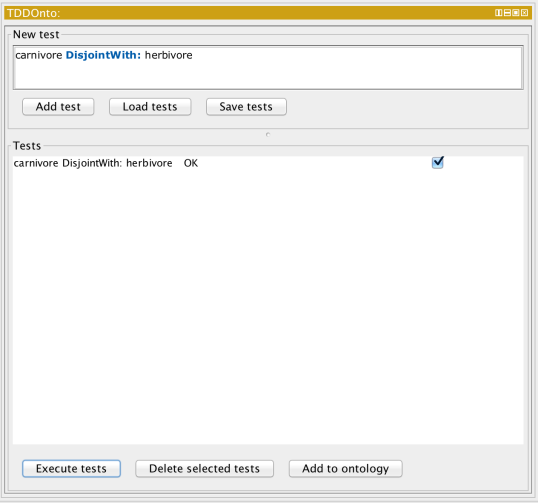 Now let’s do a TDD test that is going to fail (you won’t know upfront, of course); e.g., testing whether impalas are herbivores:

The TDD test failed because the subsumption is neither asserted nor entailed in the ontology. One can then click “add to ontology”, which updates the ontology:

Note that the reasoner has to be run again after a change in the ontology.

Lets do two more: testing whether lion is a carnivore and that flower is a plan part. The output of the tests is as follows: 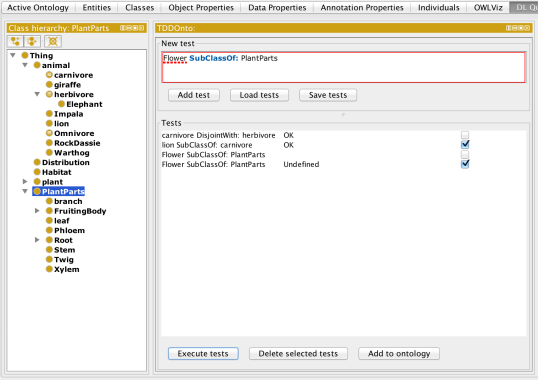 It returns “OK” for the lion, because it is entailed in the ontology: a carnivore is an entity that eats only animals or parts thereof, and lions eat only herbivore and eats some impala (which are animals). The other one, Flower SubClassOf: PlantParts fails as “undefined”, because Flower is not in the ontology.

Ontologies do not have only subsumption and disjointness axioms, so let’s assume that impalas eat leaves and we want check whether that is in the ontology, as well as whether lions eat animals:

The former failed because there are no properties for the impala in the AWO v1, the latter passed, because a lion eats impala, and impala is an animal. Or: the TDDOnto tool indeed behaves as expected.

Currently, only a subset of all the specified tests have been implemented, due to some limitations of existing tools, but we’re working on implementing those as well.

If you have any feedback on TDDOnto, please don’t hesitate to tell us. I hope to be seeing you later in the week at DL’16, where I’ll be presenting the paper on Sunday afternoon (24th) and I also can give a live demo any time during the workshop (or afterwards, if you stay for KR’16).