Every now and then, I dabble into trying to improve on teaching, which in this case of the post’s topic, is in the form of an implementation project. Yes, one of those with working software as result, thanks to the programmer and CS honours student Yaseen Hamdulay who implemented it. In short: we now have a software-based audience response system that satisfies some pertinent requirements for its use in lectures: math support, figures, and diacritics, and one-click question release and showing the results so as not to hold up the lecture. It will be presented at UCT’s upcoming Teaching & Learning Conference on Oct 22-23.

Peer instruction (PI) enables students to learn from each other. Unlike some other educational interventions, PI has been shown to improve the final grade by up to 34-45%, regardless the discipline it is used (computer science, genetics, zoology, psychology—you name it). On top of that, it generally receives positive feedback from students, because it makes the lectures more engaging, or in any case at least less dull.

From the practical side on how to go about using it in class, there are four principal options: expensive hardware-based ‘clickers’, software-based audience response systems (ARSs) with students’ smartphones or laptops, card and picture-taking (image processing), and none of that through indicating the concept test’s answer with one’s fingers on one’s chest. Regarding resources, the software-based ARS sits somewhere in the middle, which suits our setting well. There are quite a few software-based ARSs (see, e.g., this review). However, upon analysis, they all have issues hampering effective classroom use. For instance, they may not have a single-question release or are for-payment only (e.g., Socrative, Google Forms, Pinnion, and eClicker), or have an impractical results display—they make money from corporate accounts, so the tools are geared for that. The major drawbacks of all these systems are that at least the free versions, if not all, have very limited question setting and answer options, mostly having just plaintext. So, no pictures in the question, answers can be only 100 or 140 characters short, let alone displaying mathematical symbols. Perhaps surprisingly in the international arena, they don’t do diacritics either, even though multiple natural languages have them. For the lectures, this ends up really clumsily and cumbersome, where such questions also must have projected on the screen an ‘offline’ version and then toggling with the screen of the voting progress and results.

Thus, the main problem is that there is no software-based ARS that contains basic required features for smooth use of PI in the classroom irrespective of one’s discipline, hampering the uptake of this active learning intervention. The current software-based ARSs are prohibitive in uptake of PI in the classroom, yet in our—and many others—medium-level resource setting, extensive use of hardware clickers is not a sustainable option, nor are structural expenses of the user-based payment schemes an option, for they effectively discourage broad participation due to the by-participant payment scheme.

To address these issues, we developed an ARS that has the following features: support for figures, mathematical formulae, proper HTML text for display of diacritics, one-click question release, showing voting progress, results, question reset, saving of the voting results of a session (among others). This is a web-accessible ARS that can cater for various disciplines within one software system and that is simple and fast to work with.

The project page has several screenshots and the link to the tool. It requires a simple registration (at this stage, we don’t bother with email verification—so don’t lose your password), but is then also immediately usable.

To brighten up this post, here are some screenshots; others are on the project page and some have explanations in a previous post on using PI in a networks course, like the one that has maths and a picture in one.

Screenshot of a question with a picture:

Question with a figure

Note that the lecturer controls (bottom left, and top-left to go back) are intentionally kept in small font. It’s easily readable from the lecturer’s machine, but it’s irrelevant to read for the audience.

Screenshot of a question with some maths, with first the interface for creating the question, then the one projected, and finally the student’s interface when voting. Note that this is just to give an impression that you can do it, not that it is in any way a sensible concept test. Anything that can be done with the latex plugin for html (MathJax) can be used in the question and in the answer box, but thus not your own macros. (For the curious: the answer to the question is A (read the problem).) 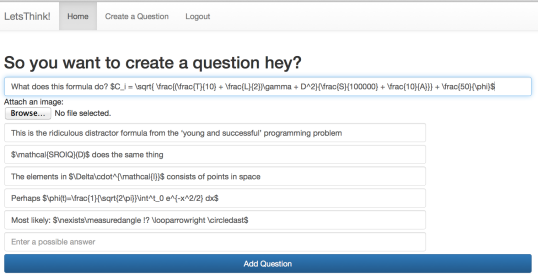 Interface for creating a question

The question rendered in the presentation interface

Small screenshot of the voting interface

Screenshot of a question with diacritics:

Some question with diacritics.

Section of the lecturer/admin interface, where you can choose to group questions

Exported results from the voting imported into a spreadsheet:

LetsThink-GoAnswer has been beta-tested with my networks students last semester, has been demo-ed in a CILT seminar on ARSs, and the occasional lecturer already is/will be experimenting with it. The code will be made available on GitHub soon. In the meantime, please don’t hesitate to contact me if you have any questions, and we’d love to hear your feedback!